A.L.I.C.E, the ‘Animation League for Increased Cooperation in Europe’, was created in 2019 by a coalition of six publicly funded bodies and associations from across Europe. The ultimate goal of the project is to boost co-production of animated projects in early development by helping European animation producers to build strong intellectual property in an extremely competitive international market. United by a common conviction that competitiveness can be achieved through active cross-border cooperation, the project’s partners designed solutions for the diverse European markets and capacities that will make Europe a ‘Wonderland’ for animated series and films. These solutions are compiled in a practical guide which was released in November.

A.L.I.C.E has been recognized by Europe Creative MEDIA for its relevance to today’s creative priorities in Europe. Its approach and the outline of the new Media program were both largely inspired by the “Animation Plan for Europe” released in 2017.

Turning Europe into a Wonderland for Animated Films and Series

While ‘Alice in Wonderland’ evokes Walt Disney’s 1951 animated adaptation of Lewis Carroll’s novel, the original France-UK co-production released in 1949 is less well-known. Despite the innovative animation techniques used, involving puppets made of cardboard and sheets and a team of famous avant-garde animators, the European ‘Alice’ was crushed by Disney’s production. The story of this film inspired six European territories to join forces in a European programme, supported by Interreg Europe, to create the ALICE project and support the co-production of European animated works.

Coming from Belgium, France, Italy, Spain, Slovakia and Poland the project’s partners [i] represent a broad range of Western and Eastern European territories, different in size, geographical position, and the degree of development of their industry. Working with these disparities has fed into the partners’ work over the last two years.

There are two major challenges to be addressed to help European animation studios be more competitive:

As the project progressed, the idea of creating a framework for short-term solutions to overcome differences and potential obstacles to co-production emerged.

One way of retaining talent is to offer interesting job opportunities within Europe and help studios contribute to the development of ambitious European projects. From a producer’s point of view, this requires providing adequate financial resources and making the restrictive location-specific labour rules more flexible. Based on this observation, the ALICE group developed the “Wonderland” concept. As a label, it will open access to two tools to support exclusive opportunities for co-production in animation, particularly at the development stage.

The first tool, a “smart directory”, will allow labelled territories to promote their local talent and get detailed information about the skills and production resources available in the Wonderland. Unlike other existing databases, this directory will contain detailed profiles of animation studios that will be updated regularly to reflect the operational reality of the sector. It will provide the practical information that producers need to identify the best co-producing partners for their projects.

The second tool is a funding programme specifically designed to support producers across Europe in the initial creative phase, which generally remains underfunded, and to help them protect their rights to IP in the age of internet streaming services. 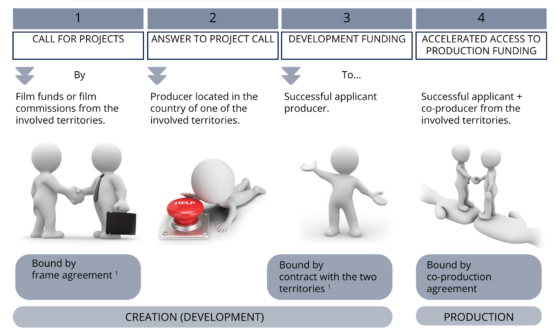 Open to any labelled territory, this programme, called “White Marketing Rabbit”, is dedicated to co-funding the creation of the pitching materials of selected transnational animated projects. The participating territories will collaborate under negotiated bi- or multilateral agreements to facilitate talent mobility in the specific territories and achieve balanced investments in the medium term. Upon successful completion of the project’s development, approved producers in the programme will have exclusive access to production financing.

By directing funds to co-productions during the initial creative phase, the new scheme provides an incentive to test creative collaborations during a low-risk financial phase.

Regardless of its use of the White Marketing Rabbit programme, a Wonderland territory will retain its label as long as it remains listed in the directory and commits to provide updated data regularly.

Guiding Policy Makers and Market Players during a Challenging Period

The recent pandemic has accelerated market transformations and disrupted the value chain at both the production and distribution levels. This is particularly true for the animation sector which is at the forefront of the technological changes that accompany these upheavals.

To help policy makers grasp the reality of the market, ALICE developed a comprehensive and flexible industry mapping methodology. Provided with a complete set of tools, this methodology aims to identify, classify, and assess the performance of the different organisations shaping the animation ecosystem in a given territory. Applicable in any territory, it can be used by any policy maker wanting to:

These new instruments and recommendations are compiled in the project Whitepaper that was released in November. As ALICE partners work on their implementation, they hope that this publication will help them engage in an open dialogue with industry professionals.

In June 2022, the ALICE group will organise a final meeting in Barcelona to present the results of the actions carried out in ALICE’s territories. The event will be open to European industry stakeholders who can challenge the group’s proposals, help enrich the content of the paper with inspiring public policies and new tested business models, and ultimately contribute to policy improvement.

Flore de Bayser : As a long-time collaborator with Wallonia’s audiovisual fund Wallimage, Flore was recently the communications manager for the ALICE project. She is the author of the project’s Whitepaper.

Daniel Zimmermann : Daniel has a broad experience in film financing and international co-productions. He is currently the Secretary General of ALICE and is also involved in several animation film and TV projects as executive producer.

The Future of TV distribution

MIPTV and MIPCOM are the world’s most important global markets for the TV and digital media industry. They are the key events for buying and selling, financing and distributing programmes in all genres, on all platforms. Together, every 6 months, they form the annual landmark events of the entertainment calendar, attracting key industry executives, thought-leaders and creative talent from the entire content spectrum to negotiate deals, network and gain insight. MIPTV and MIPCOM respectively take place every Apriland October in Cannes, France.