After the disruption caused by the COVID-19 pandemic in 2020, the global TV industry has come roaring back – with investment in content reaching new heights.
By Andy Fry on November 23, 2021 0 Comments

As 2021 draws to a close, Andy Fry looks ahead to some of the genre trends and global content TV trends that will make headlines in 2022.

Drama: From Squids To Scripted Formats

Hwang Dong-hyuk, the creator of Netflix hit series Squid Game, clearly didn’t read the memo about TV buyers wanting light-hearted, entertaining shows as an antidote to COVID-19. His nightmarish vision of heavily indebted people being used as pawns in a life-or-death game belongs more to a dystopian tradition that encompasses Black Mirror, The Walking Dead and Westworld.

So, what are the lessons for creators? Well after the success of Lupin and Casa Del Papel on Netflix, one key message is that language isn’t an issue if the core concept is powerful enough. Having masks or disguise at the heart of the show’s design also seems to resonate with audiences – something that is further underlined by Disney+’s The Mandalorian.

Drama, of course, is too broad a genre to be summed up in a single theme. While global streaming series like Squid Game tend to attract most of the headlines, Glance vice-president Frédéric Vaulpré used MIPCOM to suggest that is also a strong appetite among audiences for local scripted content. This in turn, Vaulpré says, is driving the market for scripted formats.

There are two reasons for this.

Firstly, as with entertainment shows, buyers that want to make local dramas cheaply can lean into the groundwork that has already been done in other markets. In 2021, for example Red Arrow International enjoyed a lot of format success with shows including Lice Mother, Danni Lowinski, Match and Einstein. Summing up these deals, Tim Gerhartz, president and managing director at Red Arrow, says:

“With the demand for local language content continuing to boom across Europe, we’re seeing domestic European broadcasters look to scripted formats with a successful track record as a way to boost their offering in this space.”

Secondly, there is an inevitable pressure for content distributors to get into the international market and secure format deals. They may, for example, have come on board a domestic drama as a deficit financier in order to secure tape sale rights. But if the value of those rights is limited by the local tone of the show, then format deals are a way to extract increased revenue from the same IP (with the potential for yet more tape sales of the new version). Format deals that reinforce growing interest in this model include France’s Call My Agent!, adapted for the UK and India, and Mother, a Japanese show reinvented for Turkey and Italy. Early this year leading independent distributor All3media International also made it clear that scripted formats were a priority for the firm with UK dramas including Clique, Ackley Bridge and The Nest available for adaptation, as well as New Zealand–originated comedy drama Step Dave.

One positive to emerge from the scripted format trend is that it gives buyers the confidence to tackle neuro-diverse stories – that they may have found too risky to originate themselves. Israel’s The A Word was a trailblazer, and it will be interesting to see how the US remake of Belgium’s Team Chocolate fares.

Led by indie producers – for example ITV-owned Cattleya and Fremantle-owned Wildside – Italy has finally emerged as the scripted TV powerhouse that its cinematic history always suggested it could be. This month, for example, sees the final season of Gomorrah, the country’s most successful TV export – sold into 200 countries and now available on streamer HBO Max. Buoyed up by the success of Gomorrah, Italian producers have subsequently delivered Medici: Masters Of Florence, My Brilliant Friend, Romulus and English-language series The Young Pope (followed by The New Pope). StudioCanal-distributed ZeroZeroZero is another show with Italian creative DNA that has been sold extensively around the world

A big issue for Italian scripted production, however, is whether it can move beyond the kind of Rome/Mafia/Renaissance subject matter that has always been its hallmarks. So, it will be interesting to follow the progress of Anna, a new dystopian drama that has just been licensed to a range of broadcasters and platforms including Disney+. The Sky Original production, produced by Wildside and co-produced by ARTE France, Fremantle, the New Life Company and Kwaï also just launched on AMC+ in the US.

Created and directed by Niccolò Ammaniti, Anna is a dystopian story of a ravaged world destroyed by a virus which kills adults but spares children (reaffirming the trend outlined in the first section). Jamie Lynn, executive vice-president, co-production and distribution, Fremantle International calls the show “visually stunning adaptation of a much-loved novel raises universal issues of love, loss, heartbreak and hope.”

The diversification of Italy scripted output has also benefited from increased investment by Netflix, which poached RAI’s drama chief Eleanora Andreatta in 2020. Netflix titles which show Italian drama exploring new areas include the supernatural scripted series Curon and Zero, a ground-breaking series about second generation immigrants living in Milan. The company recently opened an office in Rome and plans to significantly increase its output of local original series next year.

Entertainment Formats: From VR to Miniaturisation via Kinky Daters

Brand extensions and reboots are a familiar feature in the format business these days, with broadcasters keen to work with proven IP. Yet despite this understandable safety-first strategy, the format sector still delivers compelling new shows every season. Covid-19 willing, three emerging trends look set to capture buyer attention in 2022.

Canada has built up one of the most skilled production workforces in the world – but until a few years ago its track record on content exports was mixed. While it has always been a force to be reckoned with in kids and factual, its impact in drama and entertainment was limited. If there’s a reason for this, it is probably the result of being right next door to the world’s most dynamic content creation market.

Things have started to shift, however. First came a wave of critically acclaimed and popular English-language scripted series such as Orphan Black, Schitt’s Creek, Cardinal and The Murdoch Mysteries. Now there are signs that French-speaking Canada is also raising its game. Encouraged, perhaps, by the growth of interest in non-English language content, Quebec’s leading media firm Quebecor is investing heavily in scripted content and expects 2022 to be a game-changing year. CBC is showing similar ambition. At MIPCOM, key titles included Wipe Me Away, selected for CANNESERIES, and After, which explores the aftermath of a tragic event in a small town. Both are available in their original form or as formats.

On the formats front, meanwhile, there are signs that Canada is starting to find its feet in terms of original IP. Aside from the afore-mentioned Marblemedia, Boat Rocker owned Proper TV is making waves with shows like Hotel Makeover (on Netflix) and Mary Makes It Easy. Meanwhile, Quebec-based format production and distribution company Media Ranch had a successful MIPCOM, with IP developed by participants in its Horsepower format incubator. President and founder Sophie Ferron says the company would be partnering with The CW on eco-focused competition format – Racing to Survive. 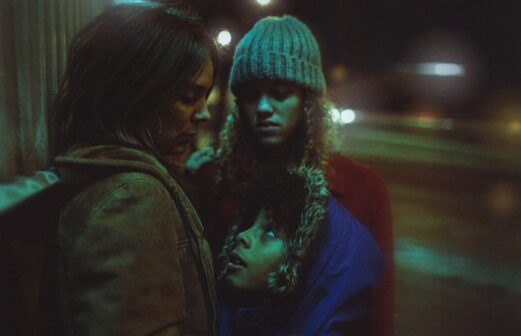 Wipe Me Away. Photo: Priscillia Piccoli

Factual: History in the Making

In a recent conversation, Ben Barrett, joint managing director at factual distributor Drive, explained how buyers are looking at history in a new light. Rather than focusing purely on Rome, Egypt and WW1/2, Barrett says they are turning their attention to recent/contemporary history. With BLM, Cop26, MeToo, mass migration and the issue of trans rights all prominent topics in the media, broadcasters and platforms are keen to explore the social forces that are shaping this current phase in human development, he says.

This point of view chimes well with that of K7 Media communications manager David Ciaramella, who used a MIPCOM session to make a similar point. His conclusion was that:

“TV’s remit has always been to inform, educate and entertain — but now audiences, creatives and industry leaders are insisting on new remits to do with effecting social change and representing society more fairly.” He also touched on buyers’ interest in modern history: “World War II and ancient history have always been fertile ground for documentary filmmakers, he said, echoing Barrett, “but now creatives are looking at more recent periods, eras that society can remember, to see if there are any lessons to be learned.”

Examples he cited include Q: Into The Storm, an HBO production which interrogates the role of QAnon in the platforming of extremism. He also showcased Unheard, a LADbible investigative series exploring racial injustice in Australia, and Arctic – an environmentally-themed doc from Canal Sur in Spain. Sport, Ciaramella said, has become an effective platform through which to explore diversity and inclusion. Examples include Jonnie’s Blade Camp (Channel 4) and Steelers: The World’s First Gay Rugby Club (Amazon Prime).

Interestingly, this growing interest in social change chimes with some of the campaigning work being done by brands – which also see these issues as core to their engagement with consumers. One area to watch in 2022 is whether this leads to ethically anchored content marketing partnerships.

Jim Watkins and his son, Ron Watkins, appear in HBO’s Q: Into the Storm.

With a population of 200 million and Nollywood, a well-oiled production industry, there are high hopes that Nigeria will be in the vanguard of African content exports. Alongside South Africa, Egypt and Kenya, the West African giant is the most likely candidate to bring original African stories to the world. There’s no question this is long overdue, given the current emphasis being placed on diverse storytelling.

Companies that have shown interest in Nigerian content creators include Sony Pictures Television, which recently formed an alliance with Nigeria’s EbonyLife Media on a writers’ initiative called Àló. The purpose of the partnership is to source and develop authentic African stories that can travel.

Netflix, keen to grow its subscription base in Africa, is also working with EbonyLife. Via a recently formed partnership, the plan is to create two Netflix original series and a slate of films. Lola Shoneyin’s novel The Secret Lives of Baba Segi’s Wives will be adapted as a series, while Nobel Prize Winner Wole Soyinka’s Death And The King’s Horseman will be made into a film. EbonyLife CEO Mo Abudu, a recipient of MIPTV’s prestigious Medaille d’Honneur, says that “As a Nigerian storyteller, my biggest motivator has always been to tell authentic and untold stories that resonate with every person, regardless of where they’re from in the world, while showcasing our culture, heritage and creativity.”

Of course, the first big TV hit out of Nigeria could be French-language – not English. Canal+, an active player in French-speaking Africa for many years, acquired Nollywood studio ROK in 2019. Although the primary goal is to create shows that can work across French-speaking Africa, there’s no reason why the right story can’t attract global audiences. After Squidmania, the message is that anything is possible.

Battle studies : News from the frontlines of the streaming wars in Europe